To enjoy “Sheng Rou” (literally raw meat) noodles, one must know its history. It was created in 1979 in Hing Lee coffee shop. The first generation business was co-owned by two brothers, with the soup cooked using charcoal. Later on, as their business became better, another Hing Lee coffee shop was opened by one of the brothers. Although the two coffee shop are similarly named, it is not confusing to locals as the shop was located in two different locations. The family members of the two brothers, which are the second generation, continue on with this business. Now, there are 4 coffee shops specialising in Sheng Rou noodles coming from the same family. The other coffee shops which sell Sheng Rou noodles have added their own twist to this local favourite, for example, using tomatoes to cook the soup base. Sheng Rou noodles can be considered a  creative variation of the Teochew Pork Innards Soup, which was originally meant to serve with steamed rice, but it evolved into being served with noodles, rice noodles and flat rice noodles, either dried tossed or cooked in the soup. A simple bowl of Sheng Rou noodles has at least five different ways of serving it. However, this made this dish even more appealing to the locals, with the locals choosing their favourite condiments, and in an instant, a hot bowl of Sheng Rou noodles will appear in front of the customer. 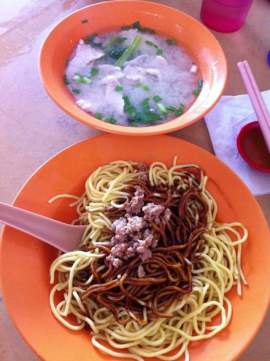 Union Tea House
Address：1703, Jalan Sin Onn, Taman Shamrock, 91000 Tawau, Sabah
Business：6 a.m. – 5 p.m.
This is a long established eatery, with its soup being brewed using tomatoes. During afternoon tea time, it sells a variety of baked goods, including toasts and baked buns. Its chicken baked buns is one that earned its reputation among the locals, and its “teh tarik” (literally pulled tea) is rich and smoothing.